The first Germans to establish their homes in the Concordia area arrived about the year 1840. Although some German speaking residents may have settled in this community somewhat earlier, it was not until the beginning of the decade preceding the middle of last century that they came in increasing numbers to this section of western Missouri. A little cross-roads store and stage station provided trading and travelling facilities as well as a postoffice. The place was called Cook&#39;s Store and was situated about two miles west of the present site of Concordia.

When Missouri joined the Union in 1821 and became the twenty-third state, it experienced a rapid settlement of people from the older states of the south and east. The largest numbers came from Kentucky, Virginia, Tennessee, and other slave-holding states. Many of the settlers brought their slaves with them and they generally established their homes on the fertile lands of the counties bordering the Missouri River as far west as the Kansas line. Many more without slaves of their own also made homes on the virgin soils of the area. Even those who had come from the states of the north were not always hostile to the circumstances in which the black man was placed, at the same time, maintaining a strong attachment to the Union.

By 1860, Lafayette County contained a greater number of slaves than any other in the state. It ranked fourth in population, exceeded only by the counties of St. Louis, Buchanan, Jackson, in the order named. Among the cities, Lexington, also ranked fourth, its population one hundred years ago being very nearly the same as today. The total for the county numbered 20,098, of which 13,724 were counted as free white (some free blacks were included). The remainder, 6,374, or almost one-third of the inhabitants of the county, were slaves.

The border troubles of the 1850's had sharply divided the pro-slavery and anti-slavery groups then resident in the Territory of Kansas and western Missouri. The enmity between the two sides was far more advanced than elsewhere in the country when the bombardment of Fort Sumter in April, 1861, opened the War Between the States. The Germans of Concordia were among the groups outstanding for their opposition to slavery and their loyalty to the Union was well known. Surrounded by so many of opposing views, the hostility toward them was accentuated by strange and foreign ways of life as well as language that multiplied the difficulties of understanding and reconciliation. 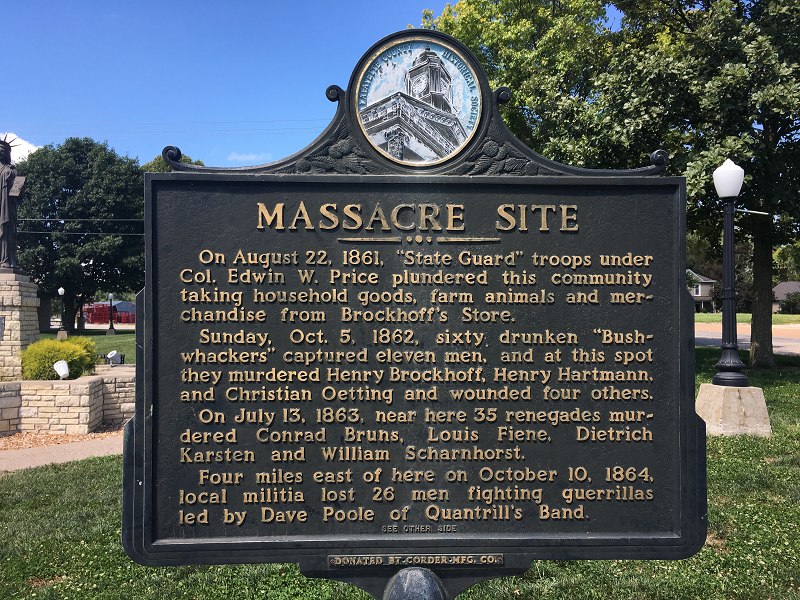 Like most German settlers, the people of the Concordia area opposed slavery and supported the North. Concordia's location at the crossroads of Northern and Southern army routes left the city at high risk for confrontation.

The first bushwacker killings occurred on October 5, 1862, at the baptismal ceremony of the twin brothers, Julius and Fritz Vogt. This whole party was taken prisoner, put in a line, and shot to death, except Rev. Biltz’s life was spared on account of the pitiful begging of his wife. Those killed were: Chris Oetting, Hy Brockhoff, Hy Hartman, and Hy Roepe. Julius Vogt Sr. was wounded but recovered later on. A historical marker in Concordia's Central Park serves as a small reminder of a Civil War tragedy that left four men dead from the firing squad-style shootings.

The date: July 13, 1863. The time: 6 a.m. The scene: about 1 mile north of the city, according to available accounts. Dressed in disguise as Union soldiers and carrying a Union flag, bushwhackers rode in from the north and crossed Davis Creek. The Southern-sympathizing renegades captured a handful of the community's German residents, then lined up their captives and shot them. The dead included Louis Fiene, 23; Conrad Bruns, 25; Wilhelm Scharnhorst, 26; and Dietrich Kastens, 30.

David Poole and W.T. "Bloody Bill" Anderson, affiliates of Quantrill's guerrilla band, supposedly led the raid. Questions linger about the bushwhackers' motivation to kill, but they reportedly knew that their targets had served in the Lexington militia. The victims had been members of Company B, 71st Regiment of the Enrolled Missouri Militia. The Concordia men had been with the militia for 125 days until being discharged on Dec. 12, 1862. The slain men were buried in Concordia at St. Paul's Lutheran Cemetery the day after the attack, but fear in the community swelled during the service. Hearing a false report of approaching bushwhackers, the congregation fled to nearby woods and cornfields.

On August 14, 1864, a small bunch of bushwhackers made a raid on Hy C. Ehlers hemp factory, killing Mr. Ehlers, the proprietor, and Wm. Walter. The rest of them had a narrow escape. 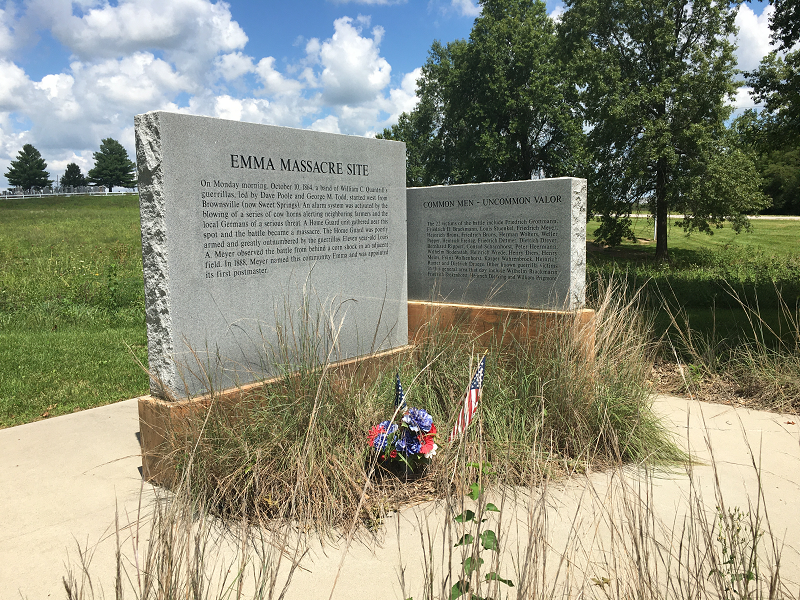 On October 10, 1864, the last raid occurred, and this one was the worst. It was claimed that it was the Quantrell gang who committed the most horrible atrocities the world ever heard of during this war. It was a terrible sight, among the moaning of the dying, the popping of guns, the shrieking of the womenfolk. A dozen houses were set on fire. Many houses were saved by the women after the bushwhackers were gone. Old men of 80 were killed, and boys of 10 years of age were shot. Hy Dierking, an old man, crawled under a corn pen after he was wounded. The corn pen was set on fire, and Mr. Dierking roasted alive. Dickenhorst, also an old man was sick in bed, he was shot in bed and the house was set on fire. Twenty-two men of the Concordia area were killed in the fight near Holy Cross Lutheran Church at Emma. Four additional men were killed that day in the Concordia area.

With the Civil War a distant memory, the victims' descendants and other community members today can only imagine the 19th-century attacks, by visiting the assumed massacre site or the cemetery where the men are buried.

Besides that, they only can remember the prayer of the victims' pastor: 'God have mercy... 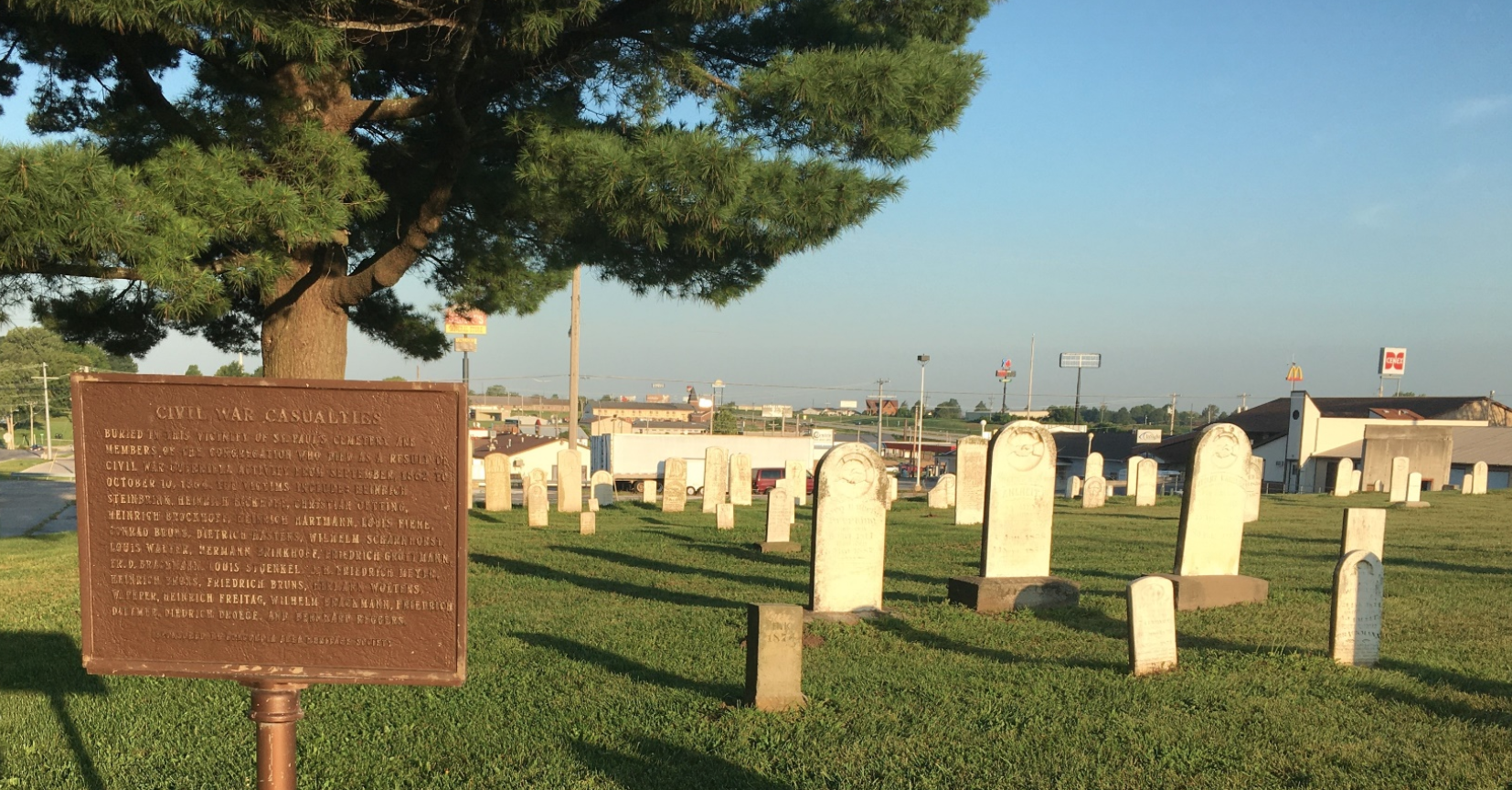 Gravesites of Bushwhacker victims on St John’s Cemetery.
Located on the north outer road one miles west of the I-70 Emma exit.